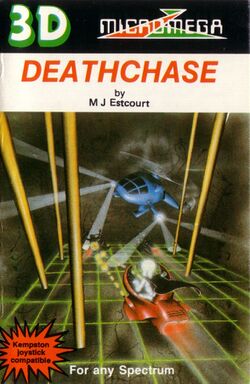 3D Deathchase is an arcade shooter game, where the player needs to chase two motorcycles in a wooded area and destroy them. It was released in 1983 for the Sinclair ZX Spectrum.

3D Deathchase may be controlled using the keyboard or a Kempston joystick. The controls for left and right will move the motorcycle to the left or right, but only when moving. Forward accelerates the motorcycle, while back will cause the motorcycle to slowdown or stop. The current speed is maintained until forward or backward is pressed. You will need to destroy two target motorcycles, one yellow and one blue (with different colours shown if they are far away.) 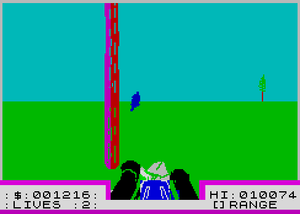 The blue motorcycle is directly in front, with the player still needing to enter the correct position to attack.

The objective is to accelerate the motorcycle until you at least begin to gain points by moving forward. While you can accelerate even more, this is not technically necessary but can help approach the cycles more quickly. Dodge the trees that come into view, and when the range indicator in the bottom right corner starts blinking, press fire to attack. The bullet can be guided mid-shot by moving the joystick left or right. Note that the motorcycles move more quickly if you are travelling faster, but you must remain at top speed in order to catch up with the motorcycles.

The player is given three lives. When all three are lost when colliding with trees, the game will end. There are eight sectors within the game, both with a day-time and night-time level. Aside from the background colour of the sky, the day and night segments play identically. Advancing to the later sectors will increase the number of trees that you have to dodge, while the target motorcycles aren't impaired by these obstacles. When the last sector is cleared, the game starts at the beginning.