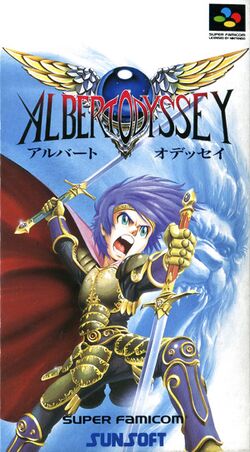 Players assume the role of Albert, the young heroic swordsman who lives in a fantasy world filled with monsters and mythical creatures. While much of the world remains in relative peace following a great war many years before, a military faction led by the dark magician Globus has emerged to conquer the newly pacified nations and expand their empire. With the help of Albert's friends as well as hired mercenaries, the player must travel the world and eventually confront Golbus and his forces to prevent another large-scale conflict.

Albert Odyssey is a role-playing video game with strategy elements where players must travel through a fantasy environment battling monsters and other enemies to advance the story. The game uses two-dimensional character sprites and environments accompanied by the Super Nintendo Entertainment System's Mode 7 graphics capabilities that give the impression of three dimensions. Players move their characters from a top-down perspective through towns and other peaceful areas, while the game's overworld and dungeons are rendered as large battlefields laden with enemies. Throughout the game, players take part in the story by interacting with non-player characters and performing story-driven quests that continually expand the game's narrative.

Using a turn-based system, both the player and computer opponent take turns moving and attacking across the field. A player may choose to move, attack, perform magic, use an item in their possession to aid themselves, or retreat to the nearest safe area to rest or restock supplies. Once two characters come in contact with one another, a battle sequence ensues where the attacking character deals damage to the opponent, lowering their health. When the player or enemy's health reaches zero, they are defeated and ejected from the field. Player's advance by confronting and defeating enemies, gaining experience points in the process that go towards making characters stronger and learn new abilities. A character can be further augmented with progressively more powerful weapons and equipment can be purchased in towns or found on defeated enemies. Progress is recorded by using save points found in set areas throughout the game that utilize the Famicom's battery backup-up system. If all of a player's characters are defeated at any time, they are forced to restart the game from the last recorded save file.