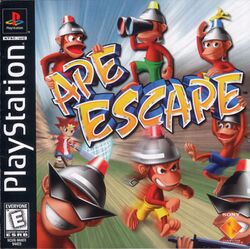 Ape Escape, known as Saru! Get You! (サルゲッチュ Saru Getchu) in Japan, is a platform game developed, produced and published by Sony Computer Entertainment for the PlayStation. Originally released in 1999, it was re-released for the four different best seller versions, the Sony Greatest Hits and Best for Family line-ups in 2000; the Platinum Range in 2001; and the PSone Books line-up in 2005. The game was re-released as a downloadable game via the PlayStation Network in Japan in 2007. Ape Escape is notable as the first video game to require the use of a Dual Analog or DualShock controller for gameplay.

Ape Escape is the first installment in the Ape Escape series, and tells the story of an albino ape named Specter who gains enhanced intelligence and a malevolent streak through the use of an experimental helmet. Specter mass-produces the helmet for the use of an army of apes, which he sends back through time in an attempt to rewrite history. The player character, Spike (Kakeru in the original Japanese version), must travel through time and capture the apes and ultimately Specter himself with the aid of special gadgets.