From StrategyWiki, the video game walkthrough and strategy guide wiki
Jump to navigation Jump to search
Are You Alice? | Table of Contents | Gameplay | Walkthrough 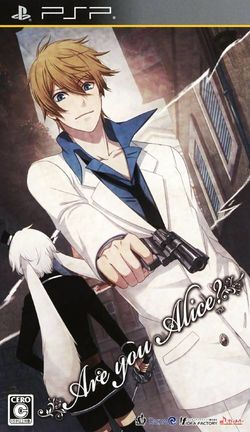 Are You Alice? is a PSP "dark fantasy" adventure game. It was developed by Otomate and published by Idea Factory, and was released on April 7, 2011 exclusively in Japan. It is based on and borrows heavily from the story of the manga series Are You Alice? by writer Ai Ninomiya and illustrator Ikumi Katagiri. The game begins with a boy who falls into the fantasy land inspired by Lewis Carroll's classic novel, Alice's Adventures in Wonderland. He soon finds himself caught in a deadly tradition in which he must kill or be killed, with the ever-elusive key to victory being a boy known as the White Rabbit. But the White Rabbit has his own motives, protecting an unknown girl that seems to have some connection to the protagonist. As the mystery deepens, the boy finds himself desiring both an escape and the truth from the maddening world of Wonderland.