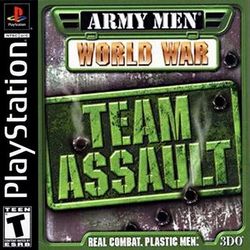 The game has 16 missions to complete, starting with a daring breakout from a Tan POW camp. You'll eventually fight your way to a submarine and engage in underwater combat. When you surface you must rescue a captured Green spy who will lead you to a Tan B-24 bomber. After defending the bomber from the onslaught of Tan planes and troops you are paradropped into a desert region where you must commandeer a train. The train leads you into a mountainous terrain which you must survive by commandeering a Tan tank in order to reach a Tan city for more information. After obtaining the information you must head to the Tan stronghold which contains the secret weapon that could change the fate of the war. You must destroy this weapon to save the Green Nation...for now at least. To complete these tasks the Green Army has assembled six crack commandos to carry out these missions. Each commando has special skills and attributes to complete the missions. The special skills range from heavy weapons to linguists and the attributes decide how long your soldier can stay alive.