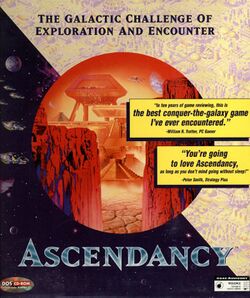 Ascendancy is a 4X science fiction turn-based strategy computer game. It was originally released for MS-DOS in 1995 and was updated and re-released for iOS in 2011 by The Logic Factory. Ascendancy is a galactic struggle to become the dominant life force, hence the title. The game's introductory cinematic states "Wildly different cultures competed for the same worlds. In the enormous upheaval that followed, one of these species would gain ascendancy."

The iOS version of Ascendancy is a Universal app, meaning it is designed for both the iPad and the iPhone/iPod touch platforms.

The original Ascendancy was released during a golden age of 4X space games in the mid-1990s. It won the Software Publisher's Association Codie Award for Best Strategy Software of 1996, as voted on by games industry members.

The music of the game was composed by Nenad Vugrinec. The intro and a few other themes have some resemblance to the "Into the Crystal Cave" theme from Final Fantasy III.