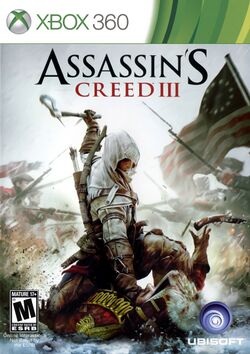 The main portion of Assassin's Creed III is set before, during and after the American Revolution from 1753 to 1783, featuring a new half English and half Mohawk protagonist; Ratonhnhaké:ton, also known by the adopted name of "Connor". In addition to the historical period, the game also features the "present day" setting, where series protagonist Desmond Miles must adventure to prevent the 2012 apocalypse, as his story develops and reaches a conclusion.

The game follows the series' standard level-based gameplay during the 21st century, as well as the open world gameplay set in 18th century colonial America, in which the player has access to a huge wilderness known as the Frontier (which is 1.5 times bigger than Rome in Assassin's Creed: Brotherhood), the cities of Boston and New York as well as a huge chunk of the Eastern Seaboard, which can be explored via a ship, the Aquila.

Free running has been simplified to allow for more fluid, parkour in the cities as well as in the wilderness, such as climbing and running on trees, mountains, cliffs, etc. Close combat has been modified, allowing Connor to duel-wield weapons and take down multiple opponents at once and players no longer need to manage the lock-on mechanic. Aiding this, Connor has access to a wide range of weapons which include musket rifles, pistols, native weapons such as the tomahawk and bow/arrows, a rope dart (used to pull foes or hang them, while on a tree) as well as the Hidden blades. Human shields can be used against firing lines of enemies. Medicine is no longer used as health recovers automatically. Stealth is also revamped, allowing players to use natural elements such as tall grass and trees to hide, along with the ability can blend between any two people.

Assassin's Creed III features new weather simulations such as snow, fog, and rain. The seasons can also change i.e., Summer and Winter,which not only effect visuals but also gameplay. Unlike the past games, this one includes animals varying from domestic (horses, cows, dogs) to wild (deer, wolves, bears). The wild ones are found in the Frontier, and can be hunted for meat or marrow in order to be sold. The quality of the kill determines the price, encouraging the player to hunt silently. For this, traps and bait can also be used.

Economy is now based on the Homestead, located in Davenport, New York, which also acts as Connor's house. The site can be visited by people such as carpenters, tailors etc. suffering from displacement due to the war. Helping and interacting with these NPC's will encourage them to settle in the Homestead. From there on, the player can craft various items and trade with them, and then sell the goods to the cities via caravan. The player can also help them build relationships with each other, which will then result in the formation of a small village. The player can also upgrade the Homestead manor as well as Connor's ship, the Aquila.

A revamped version of the Brotherhood feature returns as players can recruit citizens by completing liberation missions. They also have a much larger skill set, which allows them to start a riot, provide a covert escort, act a as a personal bodyguard etc. Other side missions include collecting Almanac pages, exploring the underground tunnels, joining hunting and fighting clubs, investigating the tall tales of frontiersmen about UFO's and monsters, and 'The peg-leg missions' in which Connor goes to underground forts and wastelands to uncover the legend of 'Captain Kidd's treasure', and others.

Assassin's Creed III also features naval expeditions. Using Connor's warship, the 'Aquila', the player can navigate the high seas, which can turn from a cool, calm sea to raging storms. Control of the ship relies on environmental factors such as wind direction and speed, local presence of storms, high waves, and rocks. Engagements are by cannon, with broadsides covering both flanks of the ship, and swivel guns that can be used to damage smaller ships which can also boarded on to find treasure. The Aquila is used in the side missions known as "privateer missions" and is also used in some of the main missions.

Multiplayer returns in this installment by Ubisoft Annecy. Along with returning modes, new ones feature a co-operative mode named Wolfpack, in which 2-4 players are charged with killing certain NPC's within a time limit, through a sequence of 25 stages. It also features Domination, a team mode where players will have to capture certain areas of the map, protecting them from the opposing team.

Additional content was released with specific retail versions. The PlayStation 3 received 4 exclusive single-player missions, titled The Benedict Arnold Missions. The gameplay revolves around Benedict Arnold and his connections with turning West Point over to the British.

On October 3, 2012 Ubisoft officially revealed a Season Pass for downloadable-content. The pass will be available for purchase 6 months after the game's launch at £23.99/$29.99 on PlayStation Network and 2400 Microsoft Points on Xbox Live. Alternatively, the pass can be purchased at Best Buy and GameStop. The pass will allow players to access the three "King Washington" story packs, "The Hidden Secrets" pack with all the preorder, retailer exclusive, bonus material, and "The Battle Hardened" pack, featuring new maps and characters for multiplayer. Purchasing the pass will be a 25% saving over buying each pack individually. Furthermore, players with the pass will have access to DLC a week before other gamers. Details of the Pass' availability on the Wii U version are yet to be determined.

Ubisoft's Uplay system enables further in-game enhancements which can be redeemed by points that are given when playing the game. The available awards are an "Assassin's Creed III Theme" (available for the PlayStation 3, Xbox 360 and PC), "The Life Scratcher Pack" which allows the player to increase capacity of ammo and unlock multiplayer profile items, "Ezio's outfit'" from Assassin's Creed: Brotherhood and "The Renegade Pack" which unlocks the Multiplayer Night Stalker's costume and additional profile items.

On December 4, 2012, "The Hidden Secrets" Pack was released for Season Pass players on the PlayStation 3, Xbox 360 and PC, with all gamers getting the pack December 11, 2012 and Wii U players at a later date. The pack includes three missions (The Lost Mayan Ruins, The Ghost of War and A Dangerous Secret), which unlock the Sawtooth Cutless, Pontiac War Club, and Flintlock Musket respectively, two single-player costumes (the Captain of the Aquila and the Colonial Assassin), and two multiplayer characters (the Redcoat and the Sharpshooter). All of the content was previously available as preorder bonuses through different retailers, or in different editions of the game.

The Tyranny of King Washington[edit]

On October 3, 2012 Ubisoft revealed the first portion of DLC for the game. Entitled "The Tyranny of King Washington", the non-canon story revolves around an alternate history where George Washington seizes power and becomes 'King of America' following the events of the American Revolution. The player will be tasked with overthrowing the dictator. The single-player campaign will be separated into 3 episodic installments which will be available post-launch.

Announced on December 4, 2012 with "The Hidden Secrets" Pack, "The Battle Hardened" Pack will include new maps and characters for multiplayer.