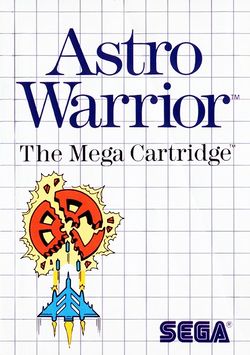 Astro Warrior is a video game developed and manufactured by Sega for the Master System in 1986.

In Brazil, Tec Toy released the game as Sapo Xulé: S.O.S. Lagoa Poluida (translated as "Smeely Feet Frog: S.O.S. Poisoned Lagoon"), where the player's ship was altered to look like a cartoon ship piloted by Sapo Xulé (a Brazilian comic/cartoon frog character), and the background was recolored green so that the levels resembled a swamp. The game was released in 1995.

The game is a basic top down shooter that was common at the time, similar to Zanac for the NES. The game plays through three zones with a boss at the end of each. Astro Warrior's three zones each have many different kinds of enemies that attack in various patterns. The stages themselves have no obstacles. Like most shooters, learning the enemies' patterns and how best to deal with them is the key to success.

Also as important is collecting power-ups, which can be accomplished by shooting at targets on the ground. These power-ups are vital to the game, as it is almost unplayable without them, especially the speed-ups. Without speed-ups, your ship moves far too slowly to avoid enemy fire. The other power-ups include a stronger laser weapon and two Gradius-style options. 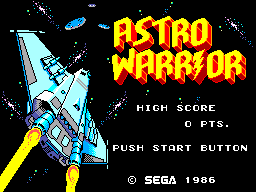 Astro Warrior is a simple game in that all you do is fly around and shoot. There are enemies to shoot and also power-up blocks in the background. Most enemies shoot at you, so you need to dodge their fire, and if you run into an enemy, it also destroys you. There is no health in the game; one hit destroys your ship and you only get three lives, although you can earn up to four more lives at a rate of one per 50,000 points. The controls are simple:

The game constantly scrolls, which means your ship appears to be moving forward (up the screen) whether you move or not. You can move from side to side and front to back. Gameplay consists of destroying enemies and power-up blocks, dodging enemy fire and reaching the end of the level where a boss fight ensues. There are three zones to beat, after which the game loops and you replay the zones going slightly faster and with more enemies. The zones will loop indefinitely, except on the Astro Warrior / Hang-On Combo Cartridge, which ends after the third iteration.

As you go through the game, the enemies get harder and faster, so it is important to collect the power-ups and speed-ups as you get them. The come directly down the center of the screen, and are somewhat hard to see amidst a lot of exploding enemies and enemy fire. To gain power-ups, you must shoot out the power-up blocks in the background. After a certain amount of blocks have been destroyed, a power-up will be sent out for you.

You start out shooting a single bullet from the front of your ship. Successive weapons power-ups will upgrade your weapons and also change the form of your ship. These power-ups look like the form your ship will take. After the Laser Beam upgrade, you can earn two follower drones, which shoot the same type of ammo your ship uses and follow your movements.

Interspersed with the weapons upgrades are speed-ups, which are necessary to be able to avoid the increased enemy presence and rate of fire.

After the 120th block, if you don't already have it, you'll get the Laser Beam upgrade every 12 power-up blocks. Once you have the Laser Beam upgrade and are over 120 blocks, no more upgrades will appear. Every time you die, your block counter is set back to zero and you begin collecting weapons upgrades and speed-ups again from the beginning. 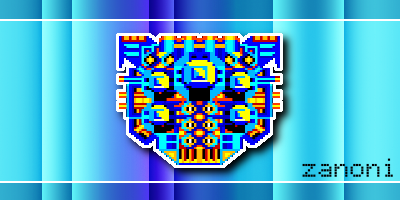 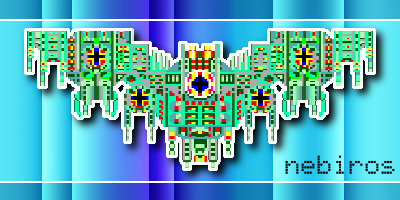 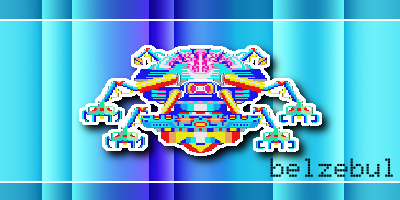 As expected, the enemies get tougher as you go along, requiring more hits from regular weaponry and shooting at a heavier rate of fire and moving faster. In addition to the normal enemy characteristics, they also become more dangerous after beating the three zones. From that point on, you may see differences in the number of enemies and how they attack.