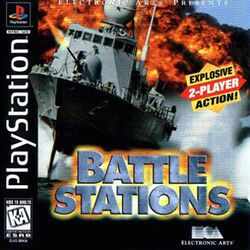 This guide is for the 1997 game by Electronic Arts. For the series by Eidos Interactive, see the Battlestations category.

Battle Stations is a vehicular combat fighting game released for the original PlayStation and the Sega Saturn in March 1997.

Eschewing traditional fighting game convention, balance, and any form of naval common sense, Battle Stations has up to two players fight each other using one of eight warships. The campaign mode features ten different scenarios, playable at five different difficulties.

The game also supports two player local competition, either in an arcade mode with ship battles only, or a war games strategic mode where ships are moved as pieces on an RTS-like board.

Described as "a 32-bit upgrade to the Intellivision classic Sea Battle" by gaming magazine NEXT Generation, Battle Stations received mixed reviews at best.