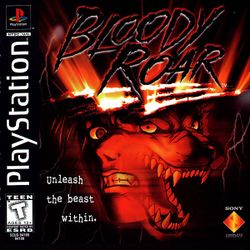 Bloody Roar is a brawler video game developed by Eighting/Raizing in 1997. It started out as an arcade game under the name Beastorizer.

This is the first game in the series, which later produced four sequels on multiple platforms.

Bloody Roar's control system is a simple combination of the traditional fighting game set up: a button used for 'punch' and a button used for 'kick'. A combination between the two creates different attack moves, while combining both together triggers a unique 'throw' move. Its originality comes with the use of the 'beast' button. Under the life bar is a beast gauge. When filled up, pressing the beast button transforms the player's character into its powerful and more agile animal form. The beast button can be used after that as a part of the attack arsenal. Also, within beast form, the rave button becomes available – this is the early version of the 'hyper beast' form which would appear later in the series.