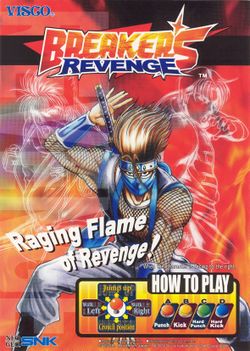 Breakers Revenge is an upgraded version of Breakers that was released exclusively for the arcades. It introduces one new character named Saizo and makes the final boss Bai-Hu into a playable character. Revenge makes adjustments to the existing cast of characters, rebalancing the game. However, the opening intro is almost identical to that of the first game and game's graphics are not that different; however, the lifebars were modified to look different compared to the first game's lifebars, while some stages' graphics were removed (e.g. flags in Sho Kamui's stage).