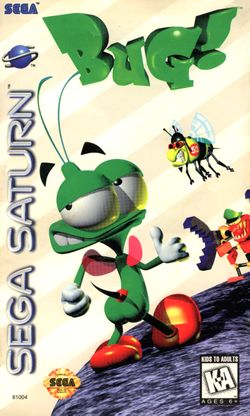 Bug! is a video game for the Sega Saturn. Released in 1995 in North America, Japan and Europe, it was one of the earliest 3D platform games. It was later released for Windows on August 31, 1996 by Beam Software, on one CD that contains both versions of the game.

Bug! is played like a traditional side-scrolling adventure title. In the same fashion as Sonic the Hedgehog, (in one level you must race Sonic), Bug jumps on the heads of his enemies to defeat them while making his way through large levels and collecting power-ups. What sets Bug! apart are the game's 3D levels, which take the side-view and tweak it. Bug can walk sideways up vertical surfaces and even upside down. Each set of levels (ranging from a bright, green grassy area to a deep red, desert level) has a deeply individual look and feel.

The actual background plot revolves around the title character, Bug, an actor in Hollywood hoping to make his "big break". Players take control shortly after Bug has signed a deal for the lead role in an action film in which his girlfriend is kidnapped by a black widow and must rescue her. The actual gameplay takes place "on the set" of each scene, and cutscenes between levels show Bug moving from one set to the next. It is used to determine the future job of the players.