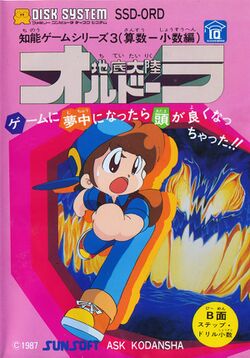 Chisoko Tairiku Orudora, whose full title is translated as "Intelligence Game Series 3 (Decimal Arithmetic Volume): Underground Continent Orudora," was the third game in an educational series of video games published by SunSoft in cooperation with Asmik. In this game, player run through a cavernous environment that is reminiscent of SunSoft's own Atlantis no Nazo. This game does not appear to integrate math problems directly into the action as the previous two titles have done, but rather saves the math for an alternate mini game which can be played on the other side of the disk.