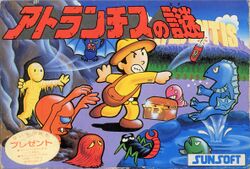 Atlantis no Nazo is an action game from Sunsoft. It's similar to Adventure Island but with a wider variety of settings and backgrounds, and less linear. Atlantis no Nazo is quite difficult, and if you're playing with an emulator, frequent state saving is recommended.

This game was never officially released in the United States. However, a prototype of the game does exist, as the planned sequel to Super Pitfall. It would have been released as Super Pitfall 2, but its release was canceled, due in part to the game's difficulty.