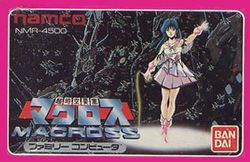 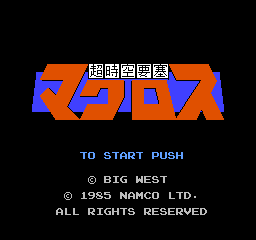 This game was also a hint of things to come as it signified the first partnership between Namco and Bandai which became one company in 2005. Namco, by now an experienced Famicom developer, designed and created the game for Bandai, the owner to the rights of several successful anime licenses, to publish.

The game itself does not reflect the complexity of the Macross story, or the outstanding quality of the series' animation. Instead, it's a rather simple side scrolling shooter with little variation in enemy formation or scenery. Upon completing the three-stage mission, the game repeats itself at a higher level of difficulty. All three modes of the VF-1 Valkyrie are available to the player, but one mode is far more favorable to the player's survival than the others, so it's unlikely that a player will transform the Valkyrie much throughout play.

Your Valkyrie Fighter can assume three different forms, each with their own strengths a weaknesses. In general, the Gerwalk mode is the most balanced in terms of offense, defense, and speed. The fact that the Battroid can fire to the left works for you and against you at the same time. While you might actually wish to fire at an enemy behind you, more often than not, you will end up firing in the wrong direction when all you mean to do is retreat. Because of this, Gerwalk mode, which does not suffer from that problem, is recommended. Fighter mode should only be used if you wish to advance the game along quickly. Even though it is very thin and harder for the enemies to hit, it moves very slowly across the screen, making it difficult to dodge those attacks which are likely to strike. The table below summarizes each mode's abilities as well as the method to access them.

Power ups can appear during any moment of the game when the screen is scrolling and new enemies are appearing. Power ups will only appear once a certain number of enemies have been defeated since the last power up has appeared. The more Zentradi that you kill, the more frequently power ups will appear. The appearance and function of each power up is listed below: 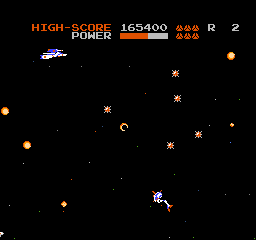 Outer Space
The game will start after watching Lynn Minmay strike a gong. Your mission to defeat the Zentradi will begin in outer space shortly after you have launched from the Super Dimension Fortess Macross. Thousands of explosions can be seen in the backdrop of space while the battle between humans and Zentradi wages on. A simplified rendition of Minmay's Shao Pai Long song will play in the background. After a short while, you will be beset upon by various Zentradi craft that you must fire at and avoid taking fire from. Your Valkyrie has an energy meter at the top of the screen, and you will lose a life if you take enough damage through collisions or bullets. Power can only be regained by collecting a Power Gauge power up, or completing an entire level. This is the longest stage of every level. Starting with the second level, you will encounter Space Mines half way to the Zentradi base. These mines cannot be destroyed, only avoided. By the third level, the power suits utilized by the Zentradi officers will appear on the screen. They will often fly towards you, stop shortly before the left side of the screen, and reverse direction, so you must avoid them coming and going if you cannot destroy them quickly. 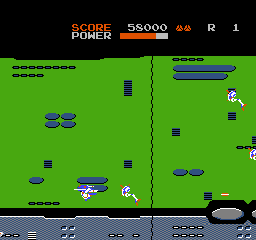 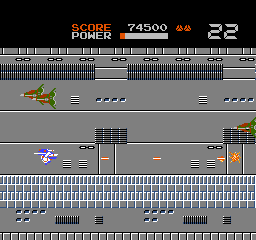 Zentradi "Nupetiet-Vergnitz" Ship
As you approach the enemy ship, you will see the green outside of the ship's bow enter the screen. The gameplay at this point is no different than before. Simply know that you will be approaching the entrance to the ship shortly. Once this happens, the enemies will stop appearing, and your Valkyrie's position will be corrected for entry into the ship. When you are inside, the scene shifts again to the gray interior of the Zentradi ship. A timer will appear in the upper right corner of the screen to indicate how long you have to destroy the core. If you fail to achieve that goal within the time limit, you will be forced to start over from the beginning of the level in outer space. Enemy Zentradi craft will resume their attack on you, but you still possess the opportunity to collect a power up before reaching the base core by destroying enough Zentradi. Keep your power level up as high as possible, since you are likely to take a bit of damage while destroying the reactor core. 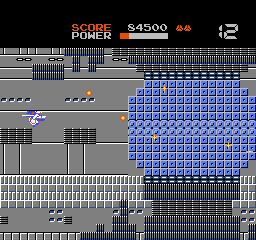 Zentradi Ship Reactor Core
The "Nupetiet-Vergnitz" reactor core is a simple structure with two bands of a destructible material across the center. In order to destroy the core, you must remove every segment of these two bands. It is highly advisable to be in Gerwalk mode when you attempt this, as the rapid fire power will speed this process up immensely. Stay out of Battroid mode so that you don't fire to the left whenever you back up. The reactor core has its own defense system of weapons that fire at you while you shoot at the core. Since dodging the bullets consumes what little time you have remaining to defeat the core, it is better to arrive with a good amount of power and absorb the shots while you destroy the core as quickly as possible. For your success, you will be awarded bonus points for every unit of time remaining on the timer as well as any remaining power that you possess. You will then start on the next level to destroy the next Zentradi ship.