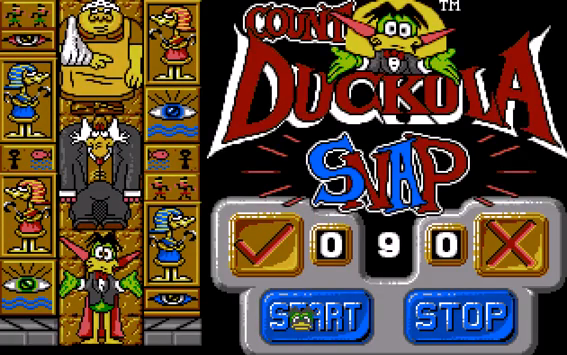 If you press the joystick's button while the Duckula-head cursor for the second menu at the start of the Commodore Amiga version is on "PLAY A SNAP GAME", you will be greeted with the above screen, instead of the opening cutscene of Duckula walking into his improperly-coloured coffin to teleport his castle to Egypt; as the Duckula-head cursor will be over the "START" button, press the button to start the two reels spinning (the first spins upward, and the second spins downward), then push the joystick right to move it to the "STOP" button, and press the button again to stop that first reel. You will then have to judge the right moment to press it again, and stop that second reel - and if all three images of the characters (Duckula, Igor and Nanny) are not properly matched, the number on the left side of the cross will increase by one and a buzzer will sound but if they are all properly matched, the number on the right side of the tick will increase by one and a fanfare will sound (but regardless of whether all three of the images are properly matched or not, the number in the centre will decrease by one, as it indicates how many tries you have remaining). Once all ten tries have been used up, the text "TUT TUT DUCKULA GET IGOR TO GIVE YOU A BROCCOLI SANDWICH" shall appear on the screen, regardless of how well you performed in the game; the game will then return to the title screen, and Count Duckula would later return to home computers for the poorly-received Count Duckula 2 in 1992.