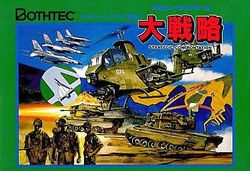 Daisenryaku (大戦略, Daisenryaku? lit. Great War Approximation) is a strategy game developed by Quest Corporation for the Famicom, and published in Japan by Bothtec in 1988. It is a war simulation game similar in nature to Famicom Wars. It was ported from other Japanese 8-bit home computers, although it has been simplified. There are 30 maps in total. Although the game was never released outside of Japan, a fan translation of the game which translates the game into English can be found here.