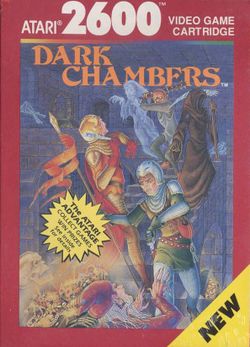 Dark Chambers is a 1988 hack and slash game that was a re-release of Dandy. It was later modified by Adam Clayton of Sculptured Software for Atari's 2600, 7800, and the XE Game Systems of the Atari 8-bit family.

Although the game resembles the original Gauntlet, Dark Chambers and Gauntlet were released after its father game, Dandy, was developed and released. John Palevich designed Dandy in 1983 for the Atari Program Exchange (APX). Two years later, in 1985, Gauntlet was released by Ed Logg, who cited Dandy as inspiration. Palevich planned a lawsuit against Logg, but settled out of court. Three years later, in 1988, Sculptured Software made changes to Dandy and Atari republished it as Dark Chambers.