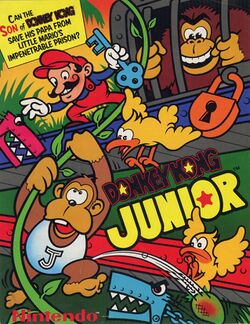 When Donkey Kong Jr. showed up in the arcades in 1982, it demonstrated Shigeru Miyamoto's ability to not only create a sequel in terms of game play, but a spiritual successor in terms of story. Donkey Kong Jr. wasn't a traditional follow up to other popular arcade games that featured the same play with some enhancements. Jr. told the next chapter in the ongoing saga between Mario and Donkey Kong, and introduced Kong's son as the new hero. With four new diverse settings, Donkey Kong Jr. expanded the Mario universe in a harmonious way.

Junior never went on to achieve the same levels of fame that his father did, due to increased competition at the arcades, but it was enjoyed by many and ported to a number of systems. Coleco again scored the home cartridge rights while Atari grabbed the rights for the computer diskette version. Before Nintendo produced the Famicom, Junior was a frequent star in many Game & Watch handheld games such as Donkey Kong Jr. wide screen, Donkey Kong II multi-screen, and the Donkey Kong Jr. table top.

When the Famicom launched in 1983, Nintendo provided their three biggest arcade hits as launch titles. Donkey Kong Jr. was launched side by side with his father. The Famicom conversion is an accurate port of the original game with only minimally altered graphics. Unlike his father, all four of Junior's stages made it intact in the NES version.

This time around, Mario is not the hero but the would-be villain (although you can't blame good hearted Mario for being upset with Donkey Kong for trying to steal his girlfriend.) Once Mario caught Donkey Kong, he imprisoned him in a cage. Whatever he is planning on doing with him, Donkey Kong Jr. must rescue his father before he finds out. Climbing from the bottom of each stage to top before time runs out, while Mario keeps Donkey Kong just out of reach until Jr. can find a way to free papa once and for all.