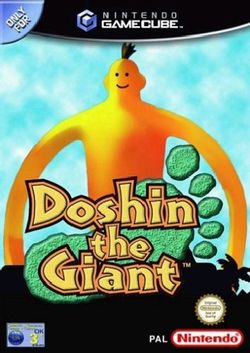 Doshin the Giant (巨人のドシン, Kyojin no Doshin?) is a Nintendo god simulation game for the Nintendo 64DD released in Japan on December 1, 1999. The original game was bundled with the 64DD console. An add-on was released five months later called Kyojin no Doshin Kaihō Sensen Chibikko Chikko Daishūgou, which took a very different perspective of the game. The original Doshin game was later released and upgraded graphically to the Nintendo GameCube and released in Japan on March 14, 2002 and Europe on September 20, 2002. It has not been released in North America because of a deal struck between Nintendo and Atlus over the localization of another niche game called Cubivore: Survival of the Fittest, which would have released at about the same time on the GameCube.

The main scenario of the game is that you control Doshin, a yellow giant. Doshin inhabits an island called Barudo, and the objective of the game is to encourage the four tribes to build monuments. The game is divided into days, of which the player can have an infinite number, which last 30 minutes and include changes from sunrise to sunset. Once the game is finished, the player can continue to unlock bonus maps.