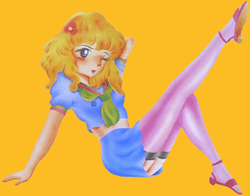 Emi's Hot Strip Game (エミちゃんの燃えろ 野球拳, Emi-chan no Moero Yakyuuken?) is an unlicensed release for the Family Computer Disk System, published by Hacker International and developed by Super Pig. Like other Super Pig titles, the game rewards successful players with images of scantily-clad and/or nude women. In this case, the object is to play the title character Emi in a game of janken, i.e. a series of rock-paper-scissors contests in which the losing player removes an item of clothing after each turn.

At the end of the game, Emi alludes to a hidden code ("secret options" in the English translation) which allows the player to see an additional screen. That hidden code, which should be entered once the screen says "Game over", is as follows: