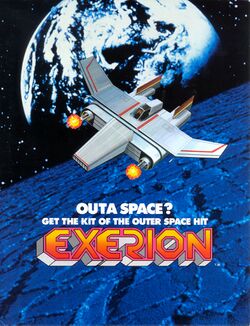 Exerion is a shoot 'em up game developed by Jaleco that features parallax effects and inertia simulation, something notable for 1983. The player travels around strange scenarios shooting aliens. The player has two types of guns: Fast single shot (limited) or slow double shot (unlimited). After every few stages, the player was presented with a bonus stage.

It was never release for home consoles outside of Japan. It was converted for play on the Famicom where it retained most of the features found in the arcade. A graphically limited conversion was also produced for the Sega SG-1000 and the MSX. The MSX received a sequel to the game entitled Zorni Exerion II that brought the graphics quality closer to the arcade. The game was later contained in Jaleco Collection Vol. 1 for the PlayStation in 2003, and in Jajamaru Jr Denshouki Jaleco Memorial for the Game Boy Advance in 2004.

Exerion is a vertical shooter that is operated with an 8 direction joystick and two fire buttons. The game's biggest features are the parallax scrolling which occurs in the background, and the sensation of inertia that is applied to the motion of the ship. The ship is equipped with two kinds of weapons. You can fire the dual shot gun which can only release one pair of shots on the screen at a time, but has an unlimited supply, by tapping the first fire button. The single shot gun can fire a rapid stream of shots on the screen at one time by holding the second fire button down, but it is limited in ammo according to the number of charges indicated on the bottom. Each weapon is best used in different situations, in order to defeat the enemies which come flying down from the top part of the screen.

Due to the inertia of the ship, you must input any reverse in direction much sooner in order to cancel the ships momentum. This was not a common feature for similar games that came out around the same time, so it distinguished Exerion from other shooters. Because the Famicom conversion was played on a horizontal screen, the enemies appeared much closer to the player's ship, which changes the feel of the game since you have to react to the enemies' location much sooner.