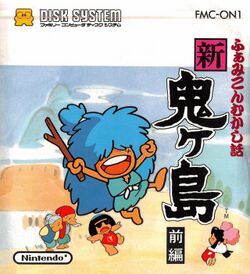 As indicated by the game's subtitle, the game borrows heavily from traditional Japanese fairytales such as Momotarō and Princess Kaguya. Most text-based adventure games of the time were written in the style of mystery novels, where the player had to solve a murder or crime of some sort, but Shin Onigashima's fairytale-like plot gave a much softer and accessible feel to the genre.

Once upon a time, there was an elderly couple living in Nagakushi village, a small village located far up in the mountains. The couple had no children, until one day, they were entrusted with the care of an infant boy and girl, as prophesied in a dream. The years went by, and when the two children were 8 years old, there was a terrible occurrence in the western capital. An evil dragon suddenly appeared in the city, turning humans into Oni; devils that suck away the souls of other humans. The Oni advanced as far as Nagakushi village, stealing away the souls of the elderly couple. Fortunately the two children were left unharmed, and they set out on a quest to save their adopted parents, not realizing that this adventure would reveal the secret of their true origins...