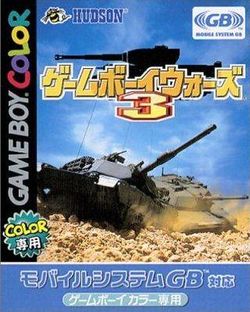 Wars Wiki has an article about:

Game Boy Wars 3 (ゲームボーイウォーズ3, Gēmu Bōi Wōzu Surī?) is the fourth installment of the Game Boy Wars branch of the Famicom Wars series. It was released in Japan in late August 2001, only half a month before the North American release of Advance Wars, but, because of the September 11, 2001 attacks on the United States, it would be the last Japanese entry until the much-delayed Japanese release of Game Boy Wars Advance 1+2, a compilation of Advance Wars and Advance Wars 2: Black Hole Rising. It would be the last game in the Famicom Wars series not to be released in North America and Europe.

Game Boy Wars 3 was initially referred to as Game Boy Wars Pocket Tactics while it was under development by Intelligent Systems, but it was renamed when development was passed to Hudson Soft.