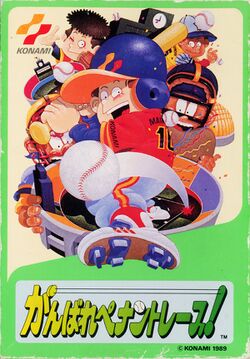 Ganbare Pennant Race! (がんばれペナントレース！, Ganbare Pennant Race!?) is a baseball game developed aand published by Konami for the Famicom in 1989. It is not a sequel to Exciting Baseball, Konami's only other baseball game for the Famicom. Instead, it's a new game that incorporates features from Konami's The Pro Yakyoo: Gekitotsu Pennant Race game for the MSX computer, and features cameos from other Konami games and characters from its popular Ganbare Goemon series. Specifically, the fictional team of "Konami Goemontai" is a team comprised entirely of Goemons. Other fictional teams include: Donuts, Gyruss, Caps, Swimmers, Walls, Targets, Lighters, Bubbles, Harps, Flowers, Brains, Olives and Konami Kurokotai.

As the owner of a team, you can increase the annual salary of each player within the limits of your operational funds, which increase if you win a game, and decrease if you lose. You can train players, or trade them with member of other teams. In addition to speech synthesis for certain phrases, there is also a fighting game element, which includes the display of health meters for each player. Fights are triggered when pitchers hit batter with the ball. These fights can also be disabled.

No sequel for this game was ever announced. The same year, Gekitotsu Pennant Race 2 was released for the MSX, and later on, Konami released Nama Chuukei 68 for the Sharp X68000 in 1991. But it would be until 1994 when Konami published another baseball game for home console, Jikkyou Powerful Pro Yakyuu '94 for the Super Famicom.