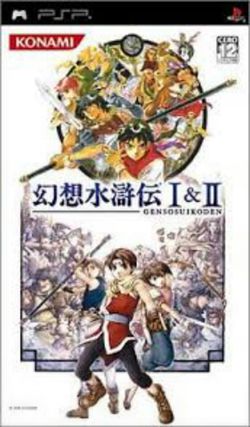 Genso Suikoden I & II (幻想水滸伝I&II, Genso Suikoden I & II?) is a re-release of the PlayStation console role-playing games Suikoden and Suikoden II, ported to the PlayStation Portable. Konami announced the game in the 4th quarter of 2005, and the compilation was released on February 23, 2006. Both games are combined in a one UMD where the player is given the choice which Suikoden game he wants to play, as well as a third choice which is "Gallery" (ギャラリー).

Several changes from the original PlayStation versions of Suikoden and Suikoden II were done for the PSP:

Gallery (ギャラリー, Gallery?) is the third option when prompted which Suikoden game to play. It has the following selections:

Movies, event viewer and ending only becomes available by loading an end-game save file of each individual game.