Welcome to Dark Energy, the fourteenth and final level of Half Life 2. 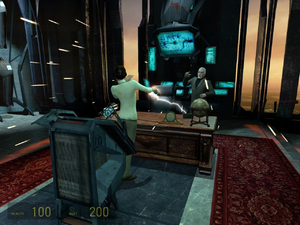 You are still in the transport pod as you move into a confiscation field, where your organic gravity gun is seized from you by a Combine Elite. Dr. Judith Mossman tells you not to struggle, and as you move forward you hear Dr. Breen. In the next room you see Eli Vance in a transport pod, who is mid argument with Dr. Breen, and as they argue Alyx is brought in contained in a transport pod. Dr. Breen continues to talk for a while, until eventually Judith seizes the opportunity to free you. As you are released from your transport pod you see Dr. Breen run off with your organic gravity gun. After making sure Eli is alright and saying goodbye, Alyx leads you after Dr. Breen. Alyx takes you to a lift, activates it and as you reach the top you see Dr. Breen ahead behind a forcefield, talking to a holographic projection of creature that you will learn about in Half Life 2 Episode One. Dr. Breen heads for another lift, leaving the organic gravity gun behind. Alyx takes down the forcefield, but Dr. Breen makes it to another lift. 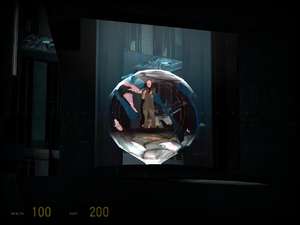 Dr. Breen tries to escape in an energy bubble. 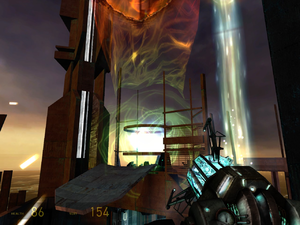 Fire an energy ball between the metal rings.

The game's finale is a frantic race against time. Go to the far end of the floor, so that the central column of the Dark Fusion Reactor is ahead and to the right, where you will see a shield dropping to reveal the teleportation portal. Fire an energy ball from one of the energy streams into the portal between the two metal rings. A set of shields will rise in the column and bugships will start to attack you from above. You must destroy all of the shields by hitting them with energy balls as quickly as possible, as if you take too long you will be killed by the bugships or destroyed by the portal radiation as Dr. Breen escapes. You will know when you have destroyed the shields; Alyx will join you before G-Man makes a final appearance and the credits roll.