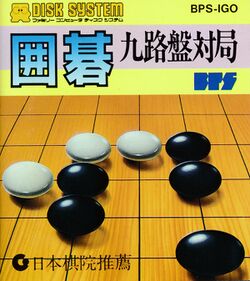 Igo: Kyuu Roban Taikyoku (囲碁 九路盤対局, Igo: Kyū Roban Taikyoku?, lit. Go: 9 Row Grid Board Game) is the first real attempt to bring the Japanese board game Go to a home console, namely the Famicom. The game was designed by Henk Rogers, a Dutch programmer who would play games of Go against the CEO (at the time) of Nintendo, Hiroshi Yamauchi. It was during one such game that the prospect of developing such a title for the Famicom was discussed. It was first developed and published by Bullet Proof Software for the Family Computer Disk System in April of 1987. It was later converted from disk format to cartridge and release in August 1987.

Prior to the release of this game, Nintendo had released a game which was played on the Go board in 1983, known as Gomoku Narabe Renju, but the play mechanics were more akin to "Connect Four" (or five, as it were). The real game of Go is traditionally played on a 19 × 19 grid, but the permutations of possibilities would take too long for the Famicom's processor to consider, so the board size has been significantly reduced to a 9 × 9 grid, which allows for a smoother single player experience. The game also features a lesson mode, in which ninjas appear to teach the player about the rules and strategy of the game.