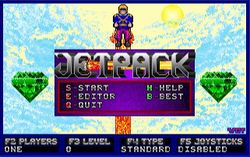 Jetpack is a platform game quite similar to Lode Runner. You control a character that must avoid enemies and other obstacles to collect treasure in a single screen level. The character can also dig through walls which regenerate. Both games also have a level editor. Differences include the ability to jump and, obviously, the inclusion of a jetpack which requires fuel.

The levels are divided into groups of 10, the last of which is a bonus level. The levels become progressively harder as the game goes on.

The game was originally published as shareware in 1993, but is currently available as freeware at the author's website. The game runs fine on an 8086 and surprisingly well on modern computers.