This is the first game in the Joust series. For other games in the series see the Joust category. 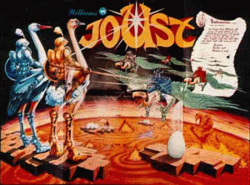 Joust arrived at the height of the golden age of arcade games, and swept players off their feet. It presented a novel game play in a novel setting that captured the imagination. The player, mounted on an ostrich sized bird and carrying a lance, must "joust" against enemy players in a battle for air supremacy.

Set inside a cavern of sorts, complete with lava, the battle took place between floating segments of land. A pterodactyl would make its presence known if the player(s) stuck around for too long. Killing an enemy would make an egg appear. If left alone, the egg would hatch into a new enemy that would replace its fallen brethren. A lava troll waited for unsuspecting victims to fly too close to the lave before reaching a claw out to grab his next meal.

Atari saw Joust as another title to snatch the rights up to and add to its library. It saw more official releases to Atari systems than any other title, including Ms. Pac-Man. While it made the rounds at Atarisoft, it was actually released for very few other platforms. Joust served as a source of inspiration twice for Nintendo; once for the simultaneous two player concept that appeared in Mario Bros., and then more directly for the gameplay found in Balloon Fight. Joust itself had an arcade sequel, Joust 2: Survival of the Fittest. Joust was released for download on the Xbox Live Arcade in 2006 with online multiplayer, enhanced graphics and new Achievements.

The yellow knight and the blue knight are the last two champions of the Joust that takes place in a world where men ride atop giant birds, and height determines the victor. Help them take on wave after wave of would-be challengers who wish to take away their title.