KULT: The Temple of Flying Saucers 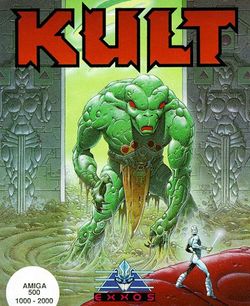 KULT: The Temple of Flying Saucers is a graphic adventure game, released in 1989 by Exxos. The American version was sold under the title Chamber of the Sci-Mutant Priestess. The game is set in a post-apocalyptic environment. Society consists of two races: Tuner, who possess psy-powers, and Protozorqs, who are physical mutants.

Raven, a Tuner, is caught prisoner in the temple of the Protozorqs, and must find his girlfriend, who was also kidnapped, to finally proceed to escape with her. Raven is aware that his quest won't be simple since the Protozorqs, armed with "zapsticks", will gladly kill him if he does anything they dislike.