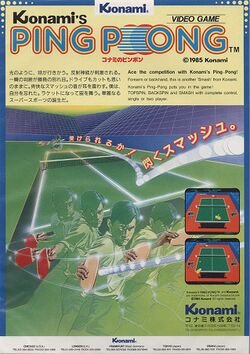 Konami's Ping Pong is an arcade game developed by Konami in 1985. It simulates the game of ping-pong or table tennis in a remarkably different manner than prior simulations of any variety of tennis. Rather than putting the emphasis on precise control and placement of the paddle in order to return the ball, the emphasis is on timing and strategic control of the ball's speed and trajectory. The player sees no other on-screen representation of themselves beyond a hand holding a paddle. The hand and the paddle automatically move left and right to match the horizontal position of the ball. Players need only concern themselves with the timing of their paddle swing, and the style of swing to use. Players can choose between three different swings, along with the choice of forehand or backhand. Pentarou, the penguin from Konami's Antarctic Adventure has a cameo throughout the game as Konami's mascot. He appears on the title screen, as well as among the crowd in the audience (left side).

Note: Your paddle will automatically position itself when your opponent is serving.

The Famicom Disk System conversion was developed by Konami, and published directly by Nintendo as Smash Ping Pong. As a result,Konami's penguin mascot Pentarou was replaced by Diskun, the Famicom Disk System mascot, on the title screen, and Donkey Kong Jr. appears in the stands on the right side. The conversion offers several variations of play, including one or two player games, plays to 11 or 21 points, and five levels of difficulty. Additionally, Deuce win conditions do not end at 15 points, but can climb as high as 99 points. The game was released for the Wii Virtual Console in Japan in 2008, and in Europe in 2009 as Smash Table Tennis.