Law of the West

From StrategyWiki, the video game walkthrough and strategy guide wiki
Jump to navigation Jump to search
Law of the West | Table of Contents | Gameplay | Walkthrough

Law of the West/Table of Contents 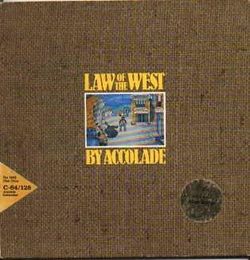 Law of the West

Law of the West is a game developed for the Commodore 64, the Apple II family of computers. It is the only game in Accolade's history to be designed by Accolade co-founder Alan Miller. The game is a kind of graphical adventure game taking place in the American Old West. Japanese company Pony Canyon ported and published the game for play on Nintendo's Famicom.

The entirety of the game happens in a small frontier town, and the player takes the role of the town's Sheriff. The scene is the town's main street, with a view from behind the Sheriff's back (the view is so close that only the Sheriff's waist, right arm and gun are visible). Various other characters appear on the main street in front of the Sheriff. The actual gameplay mostly concerns the Sheriff discussing with the various characters via a selection menu similar to those in contemporary graphical adventures. For each line the other character says, the game offers a selection of four different responses, and the discussion progresses depending on the chosen response. Law of the West marks the first use of this now-common interaction style.

As well as the discussion, the Sheriff occasionally gets involved in gunfights. In this case, the gameplay becomes a pure test of shooting skills, as the Sheriff has to shoot his opponent before getting shot himself. Gunplay was accomplished by pushing up on the joystick to draw your weapon, which would cause a joystick-controlled crosshairs to appear on the screen. The various characters would react if the Sheriff drew his gun before they had a chance to say their opening line, usually refusing to speak until the gun was put away. If the Sheriff gets shot, he blacks out, and the doctor is called to help. Depending on the Sheriff's previous interaction with the doctor and other the characters in the game (and if the doctor's in town), he may either be healed, or left for dead (either by the doctor refusing to help, or the doctor being drunk at the time). The only goal of the game is for the player to make it alive to the end of the day; if the player wishes he can gun down every character he meets without talking to them albeit this will be reflected negatively in the final score.

Characters you interact with in the game include:

Game takes place in the town of Gold Gulch. There are 4 different locations in this game:

Game ends when the Sheriff is shot and the Doctor does not heal him, or when the sun sets after 11 scenarios. You are then presented with the score, which is based on various factors such as how you dealt with the characters, how many crimes you prevented, and even your success with the ladies.

If you chose to shoot everybody, you will have received the lowest possible score.

Law of the West/Table of Contents