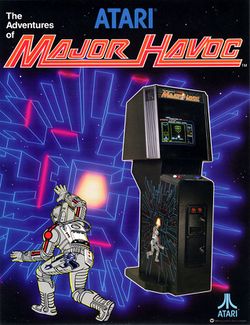 Major Havoc, fully titled as The Adventures of Major Havoc, and originally titled Tollian's Web and Alpha One, is a three-dimensional shooter/platform arcade game, that was released by Atari in 1983; it utilizes two Motorola M6502 microprocessors (the first running at 2.5 MHz, the second at 1.25 MHz) with four of Atari's Pokey sound chips running at 1.25 MHz for sound. The player must use an X-axis-only trackball, with two buttons (one for firing and jumping, the other for activating his shield once per life), to take control of the eponymous "Major Havoc" who is described in the game's attract mode as "the leader of a brave band of clones" - and as the evil Vaxxian Empire had overran his galaxy many eons ago, most of his ancestors were enslaved and taken away to their homeworld. However, a few scientists escaped and cloned Havoc, who must now fly his "Catastrofighter" through a wormhole in space, leading his clone army against the Vaxxians to free his people (by destroying their reactors).