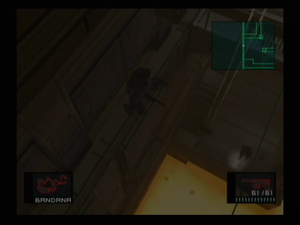 Press against the wall, and walk across, ducking as necessary.

Head straight down the stairs. Quickly take down the soldier to the north-west, and walk over to where he was standing. From there, fire one or two Nikita missiles at the crane on the left wall (enough to knock it off the wall and into the lava underneath). Go down to the bridge south of here, and press yourself against the wall. Walk to the north, while keeping tight to the wall, to make it across to the north of the blast furnace. Once you reach the platform to the north, it's safe to let go. Continue north, and go down the stairs. On the bottom floor, enter the large door with the red light.

Go straight up, and wait for the elevator. Once it arrives, get on and activate it with the control panel on the right. As the elevator begins moving, you'll be ambushed by three Genome Soldiers. Take them down with the FA-MAS. By the time you're done, the elevator will have reached its destination. Go to the right from here, being wary of the gun camera posted here. Disable it with a chaff grenade before getting off the elevator. Take the next elevator down, being careful of the claymore mines near the south-east, surrounding the ration (you can see them with the thermal goggles). After a Codec conversation with Master Miller, you'll reach the bottom. Head north. 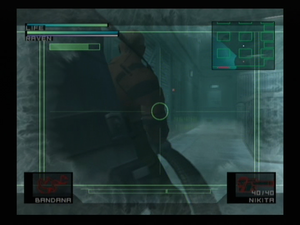 The Nikita is the best weapon to use in the early part of the battle.

Once inside, Vulcan Raven and his conspiracy will attack. Once the battle begins, take out the Nikita, and run around the crates to get "around the corner" from Raven, and shoot a missile at him. It should reach him and explode before he has a chance to shoot it down. While hiding, watch out for certain unstable crates that may fall. As Raven's health decreases, he gradually gets faster, making it harder for the Nikita to keep up. If you begin to struggle with the Nikita, you can switch to the Stinger, wait for him to come into view, lock on, and shoot. The Stinger's homing missiles should have a good chance of landing a hit. You can also plant C4, and wait for Raven to get close enough before detonating; the closer he is, the harder the C4 hits. Also make sure not to take too many hits - your Rations will likely become frozen during the battle, meaning you have to melt them by equipping them with

before you can use them (which also means having to remove the Body Armour until the rations become edible). After about 12-15 missiles, Raven should go down. Before being consumed by his ravens, he will give you a level 7 ID card. Leave through the level 7 door to the north.

The next area contains hundreds of gun cameras. One chaff grenade should do the trick. Run through the room to the north exit, without stopping, or you'll either waste time and let the chaff effect expire, or fall foul of pitfalls in the first part of the room. If you absolutely need them, there are some Stinger missiles to the right. Hurry and grab them if you must, use another chaff grenade to refresh the effect, and leave through the door to the north-west as quickly as possible.

Go up the corridor for your first glimpse of Metal Gear REX. Go around to the north-east and climb the ladder after a Codec call from Otacon, who is now trying to hack into Baker's files for the secret to using the PAL keys to override Metal Gear's detonation codes. At the top, go left and up to reach another ladder. Otacon calls with an update. Climb the next ladder. Up here, climb the ladder in front of you onto Metal Gear's "head". Go straight across. Otacon calls again. Continue down the next ladder. Go up, left, and straight down, watching out for the soldier near the bottom. Here, Otacon calls again. After this, go right and up the stairs. During the cutscene, Otacon calls and explains the trick to using the PAL key card: the key you have is actually three keys in one, and it changes shape at different temperatures. There are three terminals for the key, and the key needs to be inserted in the correct order: first, the room temperature key, which it's currently at; second, the low temperature key; third, the high temperature key. Unfortunately, Ocelot sees you holding the key, and shoots it out of your hand, into the drainage ditch on the bottom floor. You now need to find the key.

The Twin Snakes
You can complete this section without ever leaving the Underground Base, in exchange for a small portion of your health. After using the room-temperature key, go around to the right side of the top level, and, just up from the bottom-right corner, hang off the ledge where you can see another platform just below you, and drop off with

again to grab the ledge below you; if you miss, it's game over. Climb up. In front of you should be two pipes - one red, one blue. Equip the PAL key to

, and shoot the blue pipe. After less than a second, the key should be frozen. Drop down to the bottom, and return to the control room to use the key. Repeat the process, this time shooting the red pipe to heat up the key, and you're done with the keys. There should be a Ration outside the control room to recover any lost health.

Put on the body armour (if you haven't already got it equipped), and prepare to run back down. Take out any soldiers you meet, and run back to the head of Metal Gear. Once you climb over, the soldiers will be unable to follow you, and the alert will be cancelled. Climb back to the lowest level. Down here, go into the drainage ditch, to the right of the entrance. This contains toxic water, so be quick about finding the key. Run through the ditch, picking up any items you can find. Wearing the thermal goggles won't help, as they can't sense the PAL key, however the mine detector will highlight the PAL key on the radar. If you pick up a bomb, dispose of it as quickly as possible by holding

, highlighting the bomb, and pressing

to throw it. If you don't find the key quickly enough, Master Miller will call and suggest that a rat may have eaten it. If this happens, find said rat, and kill it to get the key. With the key in hand, climb back up to the control room at the top. Inside, use a chaff grenade to disable the cameras, and walk over to the left computer with the key equipped to use it. 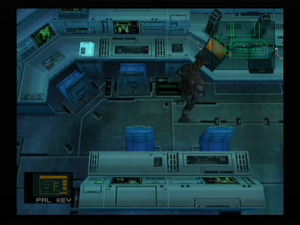 Use the PAL keys in the appropriately-coloured terminals.

Next, you need to freeze the key. Leave the underground base, and return to the warehouse where you fought Vulcan Raven. You need to stand here and wait for the key to freeze, which you can see by opening the items menu and highlighting the PAL key. If the key is blue and has a "W" symbol on it, it's ready to go. Hurry back to the control room, and insert the key. Now for the high temperature key. To warm it sufficiently, you need to go all the way back to the blast furnace. Watch out along the way for soldiers who have been posted in the warehouse, and the increased number of claymores at the midpoint of the cargo elevators. Once in the blast furnace, wait for the key to warm. The key, when warm, is red and has a backward "Z" symbol on it. Run back to the control room with the key; if you aren't quick enough, it'll cool down again. To use the final key, go to the right computer. However, when you enter the key, the nuke becomes active instead of inactive. After the Codec conversation, the control room will seal shut and fill with toxic gas. Put on the gas mask and call Otacon. After a few seconds, he'll unlock the door, allowing you to escape. When you leave, you'll see Liquid Snake running to the right. Follow him. 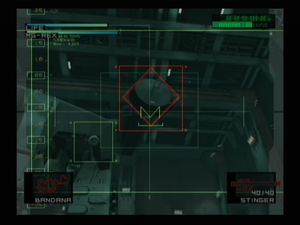 Use the Stinger to shoot down the radome in the first part of the battle.

As soon as the battle begins, throw out a chaff grenade. This will disable Metal Gear's electronic sensors, preventing its homing missiles from seeking you out. With its sensors disabled, take out the Stinger and fire a missile at the radome on Metal Gear's left. Quickly unequip the Stinger and run away - without its sensors, Metal Gear will launch its payload at the location from which you last attacked. Now use another chaff grenade, fire another Stinger missile, and move. Rinse and repeat. If you run too close to Metal Gear, it'll either fire a laser at you, or attempt to crush you (however, this also makes its missiles less likely to hit you).

When the radome's health is depleted, Gray Fox will enter and finish the radome off. While Liquid has him pinned to the wall, you can only stand and watch (if you try firing the Stinger, Snake will refuse). After Fox gets his last words out, Liquid will crush him under Metal Gear's massive "foot", and the battle will resume. This time, you need to aim at Liquid, who is now exposed due to the radome's destruction. Otherwise, follow exactly the same process until Metal Gear is destroyed. Unluckily, the blast from Metal Gear is enough to knock you out. 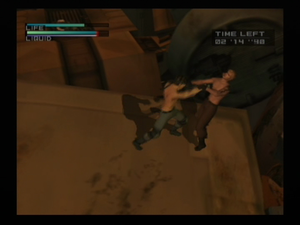 No weapons - just you, Liquid, and one last fist-fight.

When you awaken, you find yourself on top of Metal Gear REX with Liquid, who has attached a nuclear bomb to Meryl, and set it to explode at "the precise moment of her death". You now have 151151178 seconds to defeat Liquid in a one-on-one, no-weapons fist-fight. Liquid will randomly run around Metal Gear's head. When you can, get as many punches and kicks in as you can, then move away from him. If Liquid crouches down, get as far away as possible, as this is a sign that he is preparing either a jump-kick attack, or a running charge at you. Just avoid his attacks, while keeping the heat on him. If you fall off, push 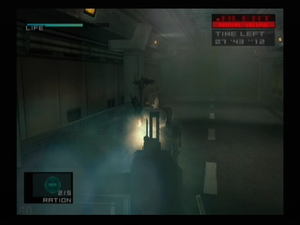 The final shootout with your brother.

After the fight, depending on the outcome of Ocelot's torture, Meryl will either be dead or alive after the battle. If she's alive, she'll help you escape the base; otherwise, Otacon will come to your aid. Either way, you now have 10 minutes to escape Shadow Moses Island. Go back through the door you came through in the cutscene for a Ration, then go up the escape route grabbing a second Ration. Continue into the parking garage where you'll be ambushed by several soldiers. Meryl/Otacon will try to start the jeep. Avoid the soldiers' fire until they're ready, then get in when they tell you to. Use

to fire the machine gun in the jeep (you can hold

for first-person shooting). Shoot the barrels to open the gate. After a few seconds, you'll come to a check point. Kill the soldiers posted here to move on. Do the same at the next check point.

After the second check point, Liquid Snake will begin chasing you in another jeep. Keep shooting at him throughout the rest of the escape route, to temporarily prevent him from shooting at you. Certain points of the chase, such as the thin section of the route where Liquid has to drive right behind you, may prove easier in first-person view. When you see the light, you've made it. If you die, however, you'll need to begin the escape scene over from the start. If you survive, sit back and enjoy the ending.