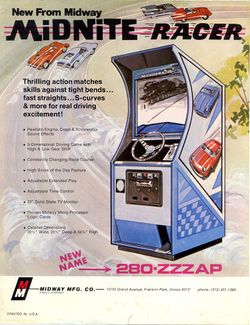 Midnite Racer (later changed to Datsun 280 Zzzap, which MAME refers to it as; also displayed simply as 280 Zzzap) is a first-person racing arcade game that was released by Midway Games in 1976. It utilizes an Intel 8080 microprocessor (running at 1.9968 MHz) and was later ported to the Bally Astrocade in 1977. This game's name was changed from "Midnite Racer" because Midway came up with the idea of a marketing promotion in which the winner of each category would receive a Datsun 280Z as a prize; realizing that their then-new racing game, which they had originally earned the right to create from Digital Games Inc., would be a perfect tie-in, it was rechristened "Datsun 280 Zzzap".

The player must use a steering wheel to take up control of a (virtual) car, with a pedal to make it accelerate and a gear shifter to switch between "low" and "high" gears - and the sides of the road are represented with white posts (similar to Atari's Night Driver, which was released earlier in 1976). Warnings relating to upcoming curves can appear at the top of the screen, telling you about the maximum safe speed to take them at, while the bottom of the screen displays your car's speedometer (maximum speed of 200 mph), the game timer (once it runs out, the game will be over), your current score (you'll receive .01 point for every metre travelled) and information such as "SHIFT TO HIGH FOR MAX SCORE!"; if you crash, the text "POW!" or "WAM!" will appear on the screen, as the timer stops and your speed resets to 0 mph, then disappear again. The text "CONGRATULATIONS! YOU HAVE SET A NEW RECORD!" appears for the "high score".