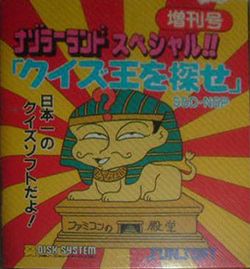 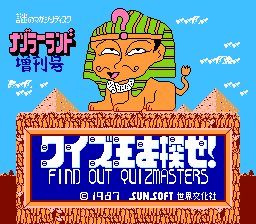 Nazoler Land Special!! Quiz Ou wo Sagase (ナゾラーランド スペシャル!!「クイズ王を探せ」, Nazoler Land Special!! Quiz Ou wo Sagase? lit. Puzzle Land Special!! Search for the Quiz King) was a special edition of the Nazoler Land series published by Sunsoft for the Family Computer Disk System at the end of 1987. Unlike the other Nazoler Land disks, this one does not contain a series of different mini-games, but rather a single game focusing on a trivia quiz. The player must visit various locations around Japan in an effort to "battle" various trivia masters, and beat all eight of them in order to claim the title as the Quiz King. The game was only released in Japan, and has never been translated from Japanese. As a result, a high level of Japanese knowledge is required to play this game.