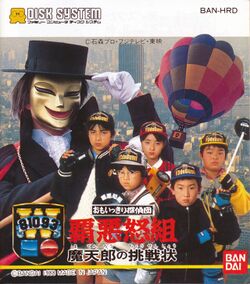 Omoikkiri Tanteidan Haado Gumi: Matenrou no Chousenjou (おもいっきり探偵団 覇悪怒組 魔天郎の挑戦状, Omoikkiri Tanteidan Haado Gumi: Matenrou no Chousenjou? lit. Omoikkiri detective club anger set evil supremacy: Tenro demon challenge) is an adventure game developed for the Famicom Disk System and published by Bandai in 1988. It is based upon a Japanese television series that aired in 1987. It features a group of five detective kids on a mission to retrieve various objects stolen by a mysterious thief who wears a golden mask. The group counts the leader Hiroshi, the cute and Aikido expert Yasuko who also happen to be the only girl of the group, Susumu, Satoru and Takeo. The mysterious thief uses many ingenious tricks to escape his pursuers, such as a huge and colorful air-balloon.

Before getting to the main portion of the game, the player must pass the organization's test. After entering personal information such as name, birth-date and blood type, the player must go through two challenges. The first one is a memory test. Eight character faces (from a list of four) appear at random on the screen and the player needs to remember the order in which they came in. The second test is action based and the player must catch roses thrown by the thief, himself hanging from an air-balloon. Once the tests are passed, the real game starts. Our hero can move around town and visit buildings to gather information. He can also use various items such as a slingshot, a metal detector, a radio, binoculars etc. Baddies also wander around the city and must be avoided. They can also be knocked down using any weapon our hero may carry (like the slingshot) or by punching them on the chin.