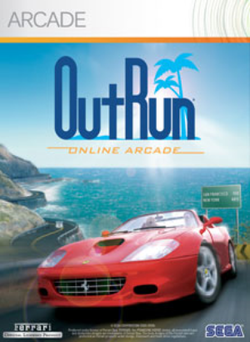 OutRun Online Arcade is the most recent release in the Out Run series, which was developed by Sumo Digital, and published by Sega. Partially based on OutRun 2006: Coast 2 Coast, the game contains only the 15 courses from OutRun 2 SP, and supports online head-to-head play for six players.

All of the cars in the game are Ferraris and can be chosen with a variety of different colours including red, blue and green.

Players must pass through five courses to get to the goal. The player starts off on a course and when they get to the end of the current course, the road will split into two. If the player decides to go left they will have an easier course but if they decide to go right they can challenge themselves to a more difficult, more enjoyable course with tighter corners and more vehicles.

The player can change a difficulty level in the help and options menu which does not make playing the game harder but reduces the time they gain from passing a checkpoint.