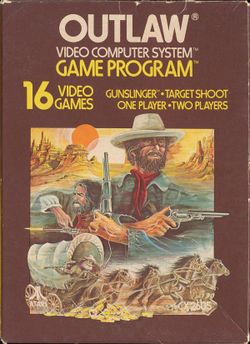 Outlaw was one of the eleven Atari 2600 titles that were part of the second wave of games released in 1978. An arcade game of the same name was originally developed by Atari and released in 1976. It simulated an Old West fast draw duel between the player and the computer (much like a very early precursor to Nintendo's own Wild Gunman.) Outlaw was a response to Midway's Gun Fight, licensed from original developer Taito and released the year before. The Atari 2600 port was developed by then Atari employee David Crane, and is more directly comparable to Midway's Gun Fight, allowing two players to engage in a shoot-out using the 2600's joysticks.

The Atari 2600 version contains 16 variations grouped into two general categories; the two player Gunslinger mode and the one player Target Shoot mode. There are multiple variations of gameplay that differ slightly from the arcade version in this Atari 2600 port. Among these game types include obstacles that must be shot around or shot through, obstacles which move, and limited ammunition.

Outlaw was not an exceptionally notable game, but it is fondly remembered by those who played it. It was released as Gunslinger under the Sears Telegames label.

There are six general aspects of each variation that dictate the rules of the game and the strategy that you will employ throughout each gun fight. These five aspects are described below. 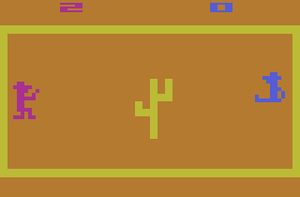 Blowaway
Ordinarily, obstacles are solid structures that can not be altered when a bullet hits them. However, when you are playing a Blowaway game, you will be able to chip small pieces of whatever obstacle happens to stand between you and your opponent—likewise, your opponent can as well. If you focus your shots on one particular level of a stationary object, it is possible to poke a hole all the way through the object that you can use to shoot at your opponent through. But be careful, your opponent can return the favor and shoot back at you through the hole you created. It is much harder to drill a particular hole through a moving obstacle. Note that all wall obstacles occur on Blowaway games.
Getaway
Only available in game variation 2, a Getaway game allows you to move almost immediately after firing your gun. Ordinarily, you are restricted from moving until the bullet you have fired hits something or disappears. In a Getaway game, you can dodge your opponents bullets with greater ease since you won't be rooted to the spot, but your opponent will have the same advantage. 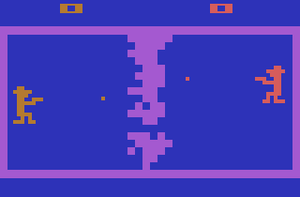 Six Shooter
In a Six Shooter game, both players hold guns that contain six bullets and neither player can reload until both players are out of bullets. Therefore, if you are the first player to unload your weapon completely, you will have no choice but to wait until your opponent empties his weapon as well before you can fire again. It won't do you any good in that case to hide behind an obstacle, you'll have to draw out your opponent's fire and make them use up those bullets! This can be especially challenging when there is a wall between both opponents, as each player must initially work together in order to have a steady flow of ammunition with which to punch holes in the wall.
Obstacle
Every variation has one obstacle in the center of the stage positioned directly between either player. The obstacle can be one of three objects: 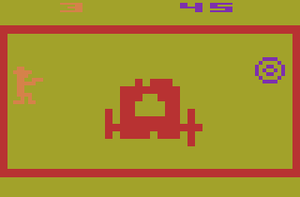 Moving Obstacles
In the game variations where an object is moving, you will have to time your shots carefully to fire a bullet above or below an obstacle that is constantly on the move. Note that cacti are always stationary; only stage coaches and the wall can move.
Target Shoot
The last four game variations are meant to be played by one player only. In this mode, the target will bounce up and down along the right side of the screen 99 times. As it does, the counter on the right increases by one, and the game ends when the counter reaches 99. You have until that time to hit the target up to ten times. Target Shoots will contain a stationary cactus or a moving stage coach, both of which may or may not be destroyed by shots.