From StrategyWiki, the video game walkthrough and strategy guide wiki
(Redirected from PC Genjin)
Jump to navigation Jump to search 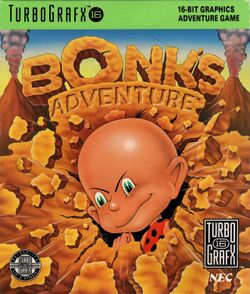 Bonk's Adventure is a 2D platform video game developed by Red Company and Atlus and released in 1990 for the TurboGrafx-16. In Japan it was released as PC Genjin (PC原人, PC Genjin?) in 1989, a play on the Japanese name for the system, 'PC Engine'. The game was re-released for the TurboGrafx-16 in the U.S. in 1992 on the Gate of Thunder 4-in-1 game CD-ROM. The game was later ported to the NES, Game Boy, Amiga, arcade systems under different titles (FC Genjin, GB Genjin and BC Genjin) and is available through Nintendo's Virtual Console service and on the PlayStation Store.

The game's protagonist is Bonk, a strong caveboy who battles anthropomorphic dinosaurs and other prehistoric themed enemies. Bonk's mission is to rescue Princess Za (a small pink Pleisiosaur-type reptile) who has been kidnapped by the evil King Drool (a large, green, Tyrannosaurus-type dinosaur). In the Arcade version, Bonk is also assisted by a female version of himself.

Bonk attacks enemies by "bonking" them with his large, invincible forehead. Bonk starts the game with three hearts' worth of health, which are depleted to blue as Bonk takes damage, and three extra lives. Bonk's health can be restored in increments by collecting fruits and vegetables.

Bonk can occasionally collect red heart power-ups that refill an entire heart worth of health, or even more rarely, a large red heart, which restores all of Bonk's missing health. There are also two rare, blue heart power-ups in the game which will increase Bonk's maximum health by one heart.

Bonking an enemy will typically knock it backward and slightly into the air. Defeating an enemy yields points and also releases a small "smiley" power-up. Bonk's smileys are totaled at the end of each stage after defeating the boss of that stage. The player is given additional points and a caveman type congratulation based on how many smileys were collected.