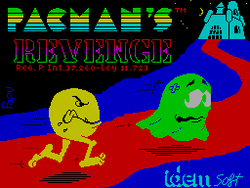 Pac-Man's Revenge is a platform game that was released by Idem Soft on the Sinclair ZX Spectrum in 1988, only in Spain; it stars Namco's signature character, Pac-Man (and, as shown in the image to the right, grants him legs, like Namco themselves had officially done for Pac-Land in 1984), but is not officially part of the series. The player must use the O, P, Y, and H keys on the ZX keyboard to make Pac-Man walk left and right round a haunted castle (presumably the one that he's chasing that green ghost, who is not Funky from 1987's Pac-Mania, for he is 16-bit, towards upon the title screen), jump over the various (unnamed) ghosts and climb the various ladders, staircases and chains - as well as collect various items, to rescue Ms. Pac-Man (who also has legs here) in the basement and escape.