In the wiki spirit, everyone is invited to upload their favorite Pac-Man patterns to this page. In order to assist you with making that possible, please click on the Pattern Template thumbnail and use the image contained there. 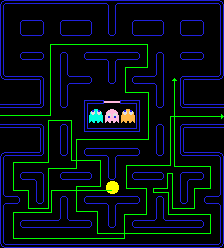 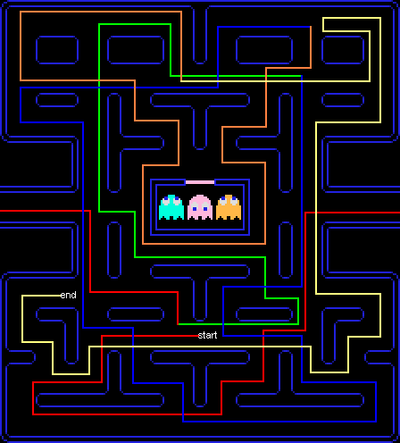 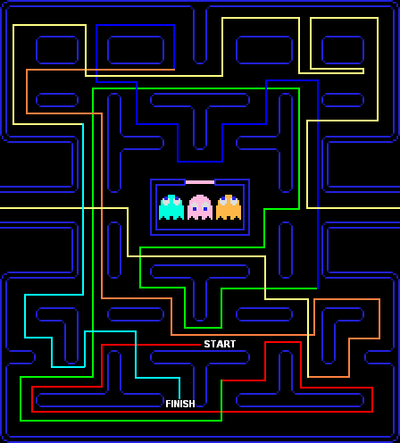 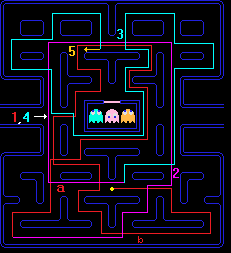 This pattern was learned by watching people in the arcades, for the 5th board (apple) and later. It takes you through both fruits, and leaves only the immediate dots surrounding the energizers.

For lower board versions of this pattern, since the monsters are slower, it basically involves stalling along the way, sometimes going around an extra block or something, and then continuing along the pattern.

a. On the cherry, duck to the side and eat the two dots first, then go back and resume the pattern. This will give Pinky time to get in position for point 1, and then they'll pretty much move similar, allowing you to grab the fruit, and continue the pattern to point 2, with Pinky a safer distance behind you.

Where you may get hung up, is right before point 3, clearing Blinky's area while he's patrolling it. This is the point at which they reverse, going into chase mode, and then not only him, but also Pinky come directly after you and trap you at point 3 (and you've already likely skipped over some of the dots to the right to avoid Blinky when he reverses).

b. On the strawberry and oranges, stall a couple of times in this area, and then clear all the dots around the block at point a. (left two first, then counterclokwise). This will give Pinky time to get in position for point 1 and beyond. You may get through point 3 with this, but since it's hard to make the same exact stall move, the results will come out differently. A monster may cut you off right before point 2 when coming up from beside the "T". You may still run into the problem right before point 3. 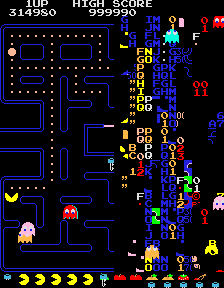 There are patterns for this, and also nine hidden dots on the right side. If you have five men, you can lose a life and gain 90 points, resulting in a maximum score of 3,333,360.

Also, don't forget that a bug will let you pass through the ghosts unharmed.