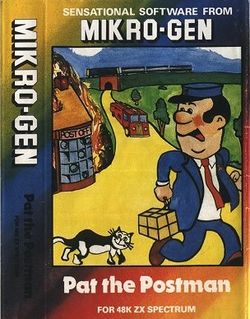 Pat the Postman is an action game that was released by Mikro-Gen for the Sinclair ZX Spectrum in 1983; as its name suggests, it is a spoof of the Woodland Animations television series Postman Pat, which was aired on BBC1 from September to December 1981 (and went on to spawn a game series of its own in 1984), but its protagonist doesn't possess a van (instead, he collects his letters on foot).

At the start of the game, Pat the Postman's unnamed town (which boasts twelve houses) will appear on the screen; Pat must visit the houses, to collect his parcels, and the amount that he has to collect depends on the selected difficulty level (3 for Amateur and 5 for Professional). You must direct Pat around the town using the 5, 6, 7 and 8 keys while avoiding any cars to visit the houses - and if he enters a house with a parcel, he must take it to the Post Office, at the bottom of the screen. However, if Pat enters an empty house, the Post Office will burst into flames, in which case he must rush to the Fire Station; on doing so, a fire engine will emerge from it to put out the flames, but if Pat takes too long, the Post Office will burn down, costing him a life (of which he starts with three). If Pat collects all his parcels, he must throw them into the mail train at the top of the screen (using the 0 key) - and if all the parcels land in the train he can start collecting more of them. Bonus parcels may also appear in the streets, which will increase Pat's score when collected but don't need to be taken to the Post Office; the game does not have an ending, and it will continue until Pat loses his last life.

Pat has to collect parcels from the
houses and get them on to the mail
train. The only trouble is he's forgotten
which houses he has to go to! Watch
the Post Office burn as he runs for the
Fire Brigade. Will he be in time?
© Mikro-Gen 1983