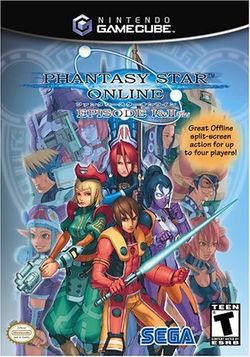 Phantasy Star Online Episode I & II was released for the Nintendo GameCube and Xbox. An online hack and slash RPG, its focus is online gameplay rather than storyline. Offline mode is also available, for single player and multiplayer. Multiplayer split-screen mode can be played with up to four players, though the framerate and visibility range is much lower than offline single-player and online modes. Playing offline on Xbox requires an active Xbox Live Silver account.

Changes from the Dreamcast and PC versions[edit]

This installment of PSO features an entirely new episode that includes 5 new regions to explore: Temple, Spaceship, Central Control Area (consisting of the Control Area, Jungle, Seaside and Mountain), Seabed, and Control Tower (Control Tower is available in Online mode and in the offline Episode II Plus version quests). This installment also adds 3 new character class/race combinations, many new items, many new creatures, and some added cheat protection (however, cheats and glitches were still found and exploited, rarely being addressed by Sonic Team). You can also play online with the GameCube if you have a broadband adapter or modem adapter. Data between the previous GameCube version and the Plus version is completely (and instantly) transferable.