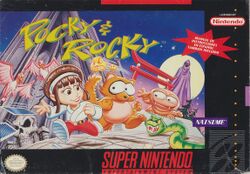 Pocky & Rocky, known in Japan as KiKi KaiKai: Nazo no Kuro Manto (奇々怪界～謎の黒マント, lit. "Mysterious Ghost World: The Riddle of the Black Mantle"?), is a run and gun shooter licensed by Taito. It was developed by Natsume, and published for release in Japan in 1992 and the rest of the world in 1993. It is the sequel to the 1986 arcade game KiKi KaiKai (unofficially released in North America as Knight Boy) and follows the continued adventures of a young Shinto shrine maiden named Pocky (known in Japan as Sayo-chan (小夜ちゃん, Sayo-chan?)) and her new companion, Rocky the Tanuki, or raccoon (known in Japan as Manuke (魔奴化, Manuke?)).