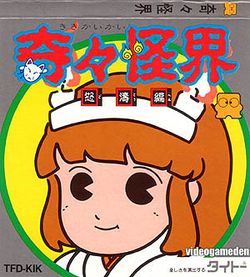 KiKi KaiKai: Dotou Hen (奇々怪界 怒濤編, Kikikaikai Dotouhen?, Mysterious Ghost World: Surging Waves Edition) is an adventure game (or more precisely, an action RPG) developed by Bits Laboratory for the Famicom Disk System and published by Taito Corporation in 1987. It is based upon, but not a direct port of, Taito's arcade game simply titled KiKi KaiKai, which was released one year prior. While the MSX2 got a straight port of the game, Taito decided to change the flow of the game for the game's first release on a Nintendo platform. In addition to Sayo, it also introduces a second shinto maiden named Miki (known as Becky in the Game Boy Advance edition of the series).

In Dotou Hen, Sayo must still rescue the seven gods of fortune from various Japanese mythological demons. However, she is no longer bound to a linear progression of levels. Instead, she must travel throughout a decidedly non-linear map in search of caves where the demons are holed up. Sayo no longer has an infinite supply of Ofuda cards to fling at her enemies. Instead, not only is her supply of cards limited, but they are also currency that she must use to gain entry into caves, and to purchase power-ups, which no longer fall from defeated enemies or purified lanterns.

The map of the world is incredibly confusing due to the strange nature of its layout. Space is very warped in this game. Many passages overlap themselves, or send Sayo to another region of the map far away from where she originally started. As a result, it is difficult to chart your own progress through the game. However, if one knows exactly where to go, the game is quite playable, and somewhat enjoyable.

Note: Due to a bug in this game, it is not currently completely playable by several actively developed emulators. Many such emulators will crash irrevocably when encountering two of the bosses. The only emulator which is known to work without crashing is called NNNesterJ.