How to find the final god[edit]

The trick to finding the final god is by correctly interpreting the clue which says that he is hidden in a dark place. Read the spoiler below to find out how to find him.

The final god's location
The dark place that the clue is referring to is a well. But not just any well will do. Only three wells allow you to access the underground area where the final god is held captive. To access the underground, you must destroy (or swat) 50 Bake Uris that appear from one of the three correct wells. If you do this at the right well, a staircase will appear in the upper right corner of the well, leading to an underground path. To reach these wells, after exiting the 7th dungeon, go south to intersection F and then west to reach the wells that work, which are indicated below in the next section.

Now that you've discovered the secret to finding the final god and accessed it, you will find yourself in a new intersection. Every direction except north returns you to the second overworld map, as follows:

Heading north will lead you to a new dungeon entrance where you must once again pay 50 Ofuda cards to enter, and the interior of the dungeon is identical to all those which you have previously explored. 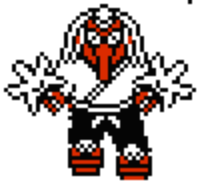 The boss of the well dungeon is a Senzan, which roughly translates as a mountain wizard. It has two attacks. From its nose, it attacks by sending forth a blast of flame straight down. From its hands, it sends a blast of wind in a diagonal direction which will shove Sayo-chan into a wall if it catches her. It uses which ever hand Sayo is nearest to attack with. When you face Senzan, you should always aim to shoot at either of his clogs. This should keep you off-center enough to avoid getting hit by the flame attack, but not so far outside that you can get hit by the wind attacks that he sends. Move around the screen to lure him away from the bottom if he gets too close to you.

After succeeding in defeating Senzan, you will rescue the final god. This gid is presumed to be the leader of all the other gods. He will tell you that your trial is not over. You will be given one final opportunity to try the Ofuda cloud bonus scene before being returned to the outside of the dungeon. 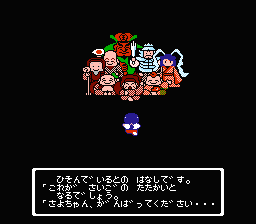 In order to finish the game, you must actually return to the seventh (七) dungeon. From the well, take the west exit, in order to be returned very close to intersection F (run east through intersection G and head north at intersection F). You must still pay the 50 Ofuda card fee to enter the dungeon, even though you've already cleared it once before. Furthermore, once you enter, you will not be returning to the overworld, so this is your last chance to collect Ofuda cards. It is not recommended that you enter the seventh dungeon with anything less than 300 Ofuda cards, or you simply won't have enough for the final trials that you are about to face. Enter the dungeon and proceed to the boss room where Benzaiten will make an appearance as though you've just rescued her. When she disappears, the game will ask you to flip the disk back to side A. After you do, you will see all eight of the gods assembled together, and they will inform you that your final task is to defeat the three gods of poverty.

The Three Gods of Poverty[edit]

The first god of poverty is Binbougani (which is also the general term for a god of poverty in Japanese). She appears as a women with the upper torso and head of a human being, but the lower torso and legs of a spider. She has only one form of attack, and that is to send forth a wide webbing that expands as it drops down the screen. You can escape getting harmed by the webs by dodging it all together, or by standing in the sections where the webbing breaks apart, provided the gaps grow enough in size for you to squeeze between them. For the most part Binbougani, walks left and right along the top portion of the screen unless you try to attack her from the side. 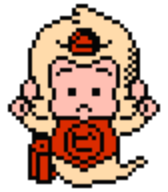 The second god of poverty is known as Kechizaru (Kechi being the Japanese word for cheap or stinginess). Kechizaru kind of looks like a floating giant baby. In each hand, he carries a set of needles. He attacks by throwing these needles at Sayo. However, either by design, or due to a programming error, Kechizaru will only throw the needles in his right hand (left side of the screen). Which means you are relatively safe from attack if you stand to the right of him. Simply throw Ofuda cards up and to the left while he hovers on the left side of the screen, and you should be able to make short work of him. 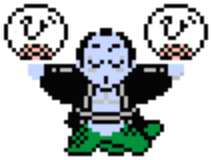 The last of the three gods of poverty has a long name, Aogiya Bushouuo. He is by far the most deadly of the three. He carries two fans, one in each hand. Each fan has the same ability to blow you away and slam you into a wall as the fans carried by Senzan. The difference is, he will use them quite rapidly if you are standing far enough to either side of him so that his fans would be effective against you. Other than these fans, he has no other attack, but he can hurt you simply by running in to you. His normal pattern of behavior is to perform a W motion back and forth across the room. If he starts high enough, he will never fly all the way to the bottom of the screen, and you will be safe to attack him from there. If he does not start high enough, you'll need to move out of his way when he reaches the bottom, and that will put you within range of his fan attack. If that were not bad enough, if you do not defeat him quickly enough, he will get tired of his W pattern and charge you, becoming very difficult to avoid. You must do your best to attack him as aggressively as you can while he is still bouncing back and forth above you.

If you defeat Aogiya Bushouuo, you will be treated to the ending of the game, which appears to discuss various generations of maiden shrines in Sayo's family, and then you will see the credits of the game. Congratulations.