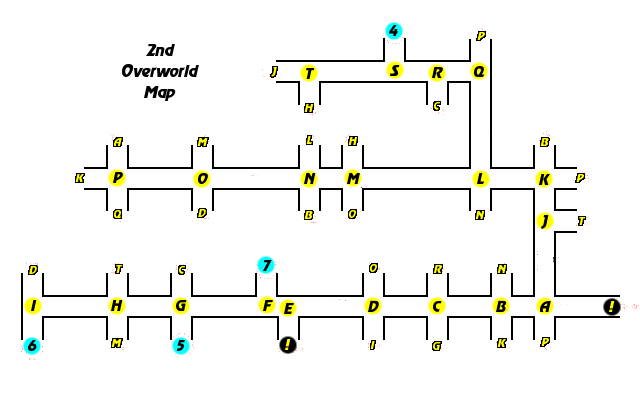 The map above illustrates the layout of the second overworld. It is a little different than the previous map. 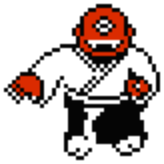 The boss of this dungeon is a one eyed prayer-bead monk. Other than the fact that he has one too few eyes instead of one too many, he is identical in every respect to his trhee eyed counterpart. Remember to try and stay below him and to his right as he gets more aggressive if you stand to his left or above him.

Juroujin is the name of the god of wealth that you rescue from the One Eyed Monk. Juroujin is a deity of happiness, prosperity, and longevity. He is usually depicted with a long white beard and wearing a scholar's cap and is often accompanied by a stag, which is his messenger. He also carries a staff and a scroll containing the secret of longevity.

The boss of this dungeon is a green Mametou. Other than having green skin instead of red, he is nearly identical to the previous Mametou that you first in the first dungeon. He does move slightly different, but not the extent that you need to change your strategy against him.

The god of wealth that you rescue this time is Fukurokuju. Fukurokuju is a deity of happiness, prosperity, longevity, and wisdom. He is usually depicted with an extremely high-domed bald head and a long white beard (symbolizing great wisdom and age) and sometimes carrying a staff and a scroll containing the world's wisdom.

The boss of this dungeon is the Mao Kitsune, or demon tail fox. He features a distinctive set of seven tails. Whenever it sits still, he wags his many tails around, which has a similar effect as Sayo waving her wand; it deflects attacks, including Sayo's Ofuda cards. Therefore, he is invulnerable in this state. To hurt him, you must wait for him to move from one location to another. This is the only time when he isn't waving his tail, and your only chance to damage him. After wagging his tail six times, he will change his location, and when he is in the quick process of moving, this is your opportunity to attack him. He will usually choose to move closer to you, so keep a healthy distance between you. While you fight with him, smaller gray foxes will appear from the sides of the screen in an effort to stop you from attacking their leader. These are easily dealt with by throwing Ofuda cards at them. This is one boss that you cannot defeat as fast as you can attack him, so be patient and be prepared for a longer fight. You should keep the wasting of Ofuda cards to a minimum, so do not throw them until just before he starts to move.

The god that you rescue is Ebisu. Ebisu is the patron of fishermen and favours them with a good catch. He also ensures safe journeys for all seafarers since he himself arrived into Japan from the sea. In the countryside, he is considered a guardian of the rice fields and agriculture in general. Land merchants, caterers, farmers and other tradesmen have adopted Ebisu for prosperity in return for their hard work. All this makes him the most popular of the seven gods.

The boss of this dungeon is the tanuki known as Manuke. As animals, tanukis carry historical and cultural significance in Japan. They are thought to have mystical powers, and this tanuki is no different. Manuke has the power of disguise. He can transform himself into a near perfect replica of Sayo-chan! However, there is one obvious difference in his disguise: the presence of a tanuki tail. While you won't have any difficulty discerning the real Sayo from the fake one, fake Sayo is still a dangerous foe.

When disguised as Sayo-chan, Manuke throws Ofuda cards at Sayo. If these cards hit, Sayo loses one health point. Manuke will also whack Sayo with his own Gohei wand, which will send Sayo flying into a wall, causing another health point loss. (A bug will cause Sayo to get caught up in Manuke's wand, but she will only lose health once she is sent flying.) However, Manuke is just as susceptible to Sayo's Gohei, and Sayo can send Manuke flying if she hits him with it. When Manuke takes enough damage from Sayo's Ofuda cards, or if he is sent flying into a wall, he transforms back into a Tanuki. At this point, he run around the edges of the room. After a brief rest, he will transform back into Sayo. Focus your attack on him no matter what form he takes, and he will be defeated.

The god that you rescue from Manuke is Benzaiten. The only female goddess out of the seven gods of fortune, she is the goddess of luck, love, eloquence, education, the arts, science, and patron of students, artists, geishas, and entertainers in the eating-and-drinking business. Her virtues also include happiness, prosperity and longevity. She can protect us from natural disasters and gives wisdom to succeed in battle.

As you rescue each of the seven gods of wealth, they inform you of an eighth god, the high god that has been kidnapped, and the riddle that must be solved to find him. Continue on to the next page of the walkthrough to learn how to find him, rescue him, and reach the end of the game.