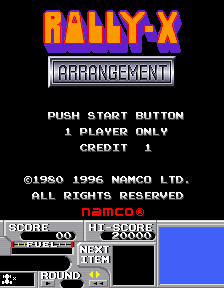 Rally-X Arrangement is, as the naming suggests, a remake of Namco's first driving game, Rally-X; it was released in 1996 as a part of the compilation arcade game Namco Classics Collection Vol. 2 and unlike the other five "Namco Arrangement" games is for one player only. The original type of red cars have also been christened "Formula" and there are also three new types ("Touring", "Drag" and "Neo Formula", the last of which can release their own black smoke screen to temporarily stun the player's car) - and there is also a new kind of blue, square ("powerup") flag which, when collected, allows you to attack the red cars (something every Rally-X player must have wanted to do, for sixteen years!) as well as slow them down (and cause them to run away!), refuel, drop bombs, make "Drag" cars visible on the radar, crush the rocks, speed up your car, and collect the six letters of the word "EXTEND" (in order to earn an extra life) depending on what the next item box at the bottom of the screen displays.

The format for the bonus rounds has also been changed; the player must now guide the car to collect ten of a second new kind of baseless, yellow, triangular flag while avoiding the walls (which are made up of rocks) and passing through a goal gate before a timer at the bottom of the screen runs out, and the final round also involves having to pass through a goal gate (marked FINISH), after collecting the flags to finish the game (while still avoiding the red cars, as they try to stop the player from doing so).